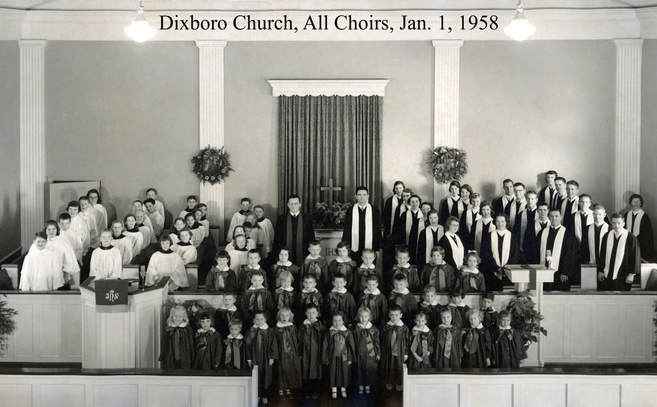 The Centennial Year of the Dixboro Methodist Church [began] on December 10, 1957, with a Centennial Opening Banquet held at the church Fellowship Hall. A fine dinner served by the Washtenaw Rebekah Lodge was enjoyed by the near- capacity crowd which attended. This was eaten by the light of old kerosene lamps brought out of storage by various members of the church to provide the proper atmosphere for the occasion.

Ministers who had served the Dixboro church over the past fifty years were special guests for the evening. Following a service of carol singing, pastors who attended were introduced and were given a few minutes to extend greetings and reminiscences of  Dixboro. [Present were Revs.] Harper, Wilson, Campbell, Fitch, and Halsted,  and former [District Superintendent] Rev. Harrison.

A dramatic skit, “Dixboro Builds a Church,” concluded the program, produced and directed by Donal S. Burns, Chairman of the Board of Trustees. Members of the present Board played the parts of the first Board and presented an entertaining re-enactment of the meetings which led to the establishment and building of the church. Costumes were supplied by the University of Michigan Department of Speech, and the stage setting featured antique furniture from Dixboro homes. [From the writings of Ivan Parker]

Other Significant Events of 1958
Under the leadership of Rev. Halsted, in January the church bought the historic Old Schoolhouse and its surrounding Village Green for $5,050, for which the church took out a $5,000 loan.

More Centennial Celebrations
On January 19, 1958, a family night potluck supper was held, featuring an Early-American hymn sing and speaker Dr. Clever Bald, Assistant Director of the University of Michigan’s Historical Collection, who talked about life in this area during the pioneer days. Individuals in our congregation prepared a display of historical items from that era—Bibles, hymnals, lanterns, and other items.

For Lent we invited Bishop Marshall R. Reed of the Detroit Conference to be a guest speaker on February 23. Pastor Halsted presented the church with “photostatic copies of the original map of Dixboro as platted by Captain Dix in 1826 and the title transfer, ‘Dix to Clements,’ dated 1833.”

Church historian Floyd Parker gave the church “an album of photographs…[including] the Lord’s Acre project, a church 4th of July celebration, the building of Fellowship Hall [and] the parsonage, and other scenes from the life of our church.” [From Chimes, February 1958]

On July 19, 1958, from 10:00 a.m. to 10:00 p.m., we held our Dixboro Church centennial celebration in the Old School Yard. Several hundred people attended various events: antique show and country store, children’s bicycle parade, ice cream social, archery, horseshoe contest, games of skill, baseball game, hog calling contest, and penny-a-spoonful supper. In the evening, an estimated 400–500 people watched the historical pageant that was staged outdoors in authentic costumes. It was created by Hattie Frederick, giving us glimpses of Dixboro from Captain Dix’s arrival on a horse in the 1820s to the present time. (This was repeated on July 4, 1976.) [Local newspapers, The Ann Arbor News and The Ypsilanti Daily Press, featured this event with photographs and articles the week beforehand.

That day’s profit was applied to the debt from the purchase of the Old Schoolhouse and Village Green.

A dinner organized by the Education Committee was held on October 14 with Mr. Parkins, Superior Township Planner, speaking on “Dixboro Faces the Future.”

The choir presented a sacred concert of Handel’s “Messiah” on December 21. It was a grand finale for a wonderful year of celebrations.