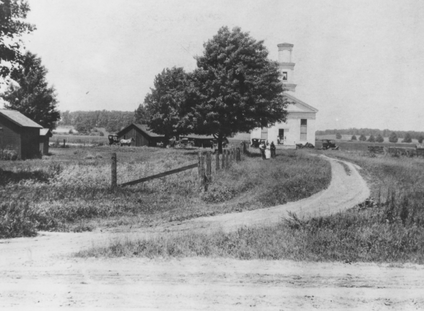 Now, 160 years later, it seems appropriate to reproduce parts of the Dixboro church history during this transition to 2018. During his first pastorate in Dixboro, 1937–1940, Ronald Brunger wrote a meticulous history of the Dixboro church based on many existing documents. Later in life he became Archivist of the Detroit Conference. What follows is exactly what he wrote.

History of Dixboro Methodist Church (1858–1940)
by The Reverend Ronald A. Brunger

​The hamlet of Dixboro was platted by Capt. John Dix in the year 1826: four lots space were laid aside for the public square on which should stand the village school and church. Years passed by before the church became an actuality.…

In the year 1857, Ira W. Donaldson, appointed Methodist minister to Ann Arbor Town, saw the need of Dixboro. He was a typical early Methodist preacher, who had been converted at 16, and given a license to exhort at 23. He was a revivalist preacher: ‘under his ministry, hundreds of souls were converted; he was powerful in exhortation.’ He came out to Dixboro and started revival meetings. They were attended, we are told, ‘with very good success.’ This significant statement is made: “Society (in Dixboro) took a different tone.”

Interest was now aroused in building a church. On Dec. 10th, 1857, a meeting of the citizens of Dixboro and vicinity was called “for the purpose of taking into consideration the Location and form of a Church to be Erected in Said place.” It was “Resolved that a Church be Erected not to Exceed in Cost $2500 and to be located within twentyfive rods of public square.”,  It was also resolved ‘that a lecture room if practicable be attached to the church’; this was not found practical. Rev. Donaldson appointed as the Board of Trustees—James Fair, Isaac N. S. Foster, C. B. Cook, W. S. Waterman, D. B. Newton, H. S. Crippen, and F. P. Galpin.

The new board of trustees met on Dec. 17 to organize, and to appoint a building committee and a committee to procure a site. On January 7, 1858, the board “Resolved that we Build a Church 35 feet wide by 55 long with 20 foot posts and vestibule 9 feet wide with gallery directly over.” On the 30th of January, the specifications of a committee were adopted, and the secretary was authorized to advertise for bids up to Feb. 12th, 1858, for building the church. On Feb. 27, 1858, the lowest proposition submitted by B. W. Ford of Saline, was accepted, and the claim of Mr. Cooper of Ypsilanti for $15, for drawing the plans, was allowed.

​On Dec. 9th, 1858, the trustees accepted the report of the Building committee “Stating the Work finished according to contract.”